ADHD Physics and the Art of Vacationing


I work a lot.  I have a full time job. I'm a wife and a mom to two very high-spirited boys who demand a lot of attention. I do housework--not very well--but I do it. I volunteer. I look after an elderly mother (my own, yes; and she's quite a handful). And lately, I've been writing web copy for quarters for a popular crowdsourcing site.  I don't sleep much.  And when I'm not doing any of the worky thingies or sleeping, I perseverate.

Some might call me a workaholic.  I like to think of myself as dedicated. Engaged. Energetic. My chart says I'm hyperactive.  A psychologist might have referred to me once or twice as "avoidant."

As it turns out, however, everybody's wrong.  Now, I'm used to being wrong.  I've become quite comfortable with it over the past couple of years, since I've been on medication for ADHD, because I am blessed to now have some clarity about how a "normal" mind works, which is virtually nothing at all like my mind works au natural.  My mind, it seems, is a bit like a helium balloon:  if no one's holding onto it to keep it near the Earth, it will most likely float away, sail hither and thither, until it eventually pops from excessive pressure, and makes a child cry.

But now I have this other perspective, the one I attribute to the particular alter ego of mine that I refer to as Lucan. Yes, Lucan, the Wolf Boy.  Lucan needs her besties to explain to her things like coupons; how to buy things in a store; how to get across town; the dynamics of child birthday-party invitations; cooking in a crock pot.  Most recently, IPG/Lucan sat across from a dear friend, furrowed and confused, feeling like the world was crashing.  Physically and spiritually, I was a wreck, and in typical fashion, Balloon Brain wanted to float higher and higher for the great metaphysical answer to all my questions of being, which of course, once answered would help me attain fulfillment.  But no.  My friend was there to work with Lucan.  So she did what any good friend would do under those circumstances:  she pulled out a pin and popped Balloon Brain.  "You need a vacation.  You need to take a week off from work.  Then you'll be fine."

Oh!! Lucan take off!! Like aiirrrplane?!  Lucan fly!   "No," my friend insisted.  "Like sit on your butt drinking coffee, and take naps.  Do fun things with the kids."

I thought, "Now who's talking gibberish! I don't even know what you're saying."  But Lucan is a faithful student, if nothing else.  So I went to my boss and said, "Yeah, so I'm thinking I might take a few days off next week."  Well if she didn't just light up like a Christmas tree.  I'd be exaggerating if I said she looked like she might just push me out the second story window to help me on my way; but it was a tad disconcerting how eager she was to have me take that vacation.  And in that moment I came to terms with the fact that I had run myself useless.

How in the hell did this happen? Well, I think I figured it out.  It's basic physics.  I'm inert.


Inertia, in physics, refers to a property of matter by which something that is not moving remains still and something that is moving goes at the same speed and in the same direction until another thing or force affects it.
﻿
﻿
Medical professionals with expertise in ADHD might refer to this as an internal-regulation deficit.  In other words, I'm basically like an old muscle car with a bad ignition and even worse breaks.  It takes  some work to get me going; and then God help me, because the only way I'm going to stop is if I run out of gas or crash into something.  And sometimes I'm apt to run out of gas while I'm crashing.

The upshot of all this is that I really suck at vacationing.  Vacationing requires one to stop and go at the same time.  To be good at vacationing, you have to be able to plan things, schedule things, buy things.  Even staying on your butt drinking coffee is hardly any fun if you can't remember to buy coffee, until your caffeine addicted 84-year-old mother starts in.  She survived scarlet fever, diptheria, the Nazis, the Russians, Disco, and the Bush Administration.  But if she doesn't get a good cup of coffee NOW (100% Arabica), it's all over-she's done.  With that surrounding me, I don't really need to do anything on my own.  I've got plenty of help getting batted around in lieu of deciding my next move.

So this "vacation" business is tricky.  I'm doing it now, actually.  Vacationing, that is.  Still in my clothes from yesterday (because I didn't actually go to bed), intermittently cleaning, blogging, "tying up loose ends" remotely for my job (that's not "working," because I'm not supposed to be doing that.)  And of course, trying to figure out how to vacation, because if my life is anything at all, it's a giant quest for useless knowledge.  I've got four more days, plus a weekend to figure it out.  Thank goodness my mother made me buy that coffee. . .

I'll check in.  Let you all know how it's going.  I'm truly hoping to glean some knowledge from all this - some tips that perhaps I can impart to you, on how to be less like a runaway freight train, or a boulder, or a crazy balloon, or a wild-animal-child.  And more like a regular person who vacations.  I'll let you know if I come up with anything.

Posted by Unknown at 6:08 AM No comments:

A Work in Progress, and Then Some

Yes, yes, I know, it's been a while since IPG's posted.  You see, sometime around 2012, I was about to post something. . .I can't remember what.  I'm sure whatever it was, it was insightful and hilarious.  Well, just as I was about to finish writing and save my post, the phone rang, so I answered it.  Had to politely explain that we were not interested in hiring a lawn care service, which reminded me of foliage, which reminded me of salad, which reminded me that I hadn't eaten breakfast.  So I got up to get a snack, and then. . .it's 2014.  I'm sure I don't need to tell you know how that goes.

Sorry I kept you waiting.

In all seriousness, I've been a chaotic mess.  Not in a bad way.  I know, I know.  What exactly is a "good" chaotic mess?  Well, let's just say that since the early days of my late diagnosis and ADHD treatment, the pendulum has sort of swung to the other side of the productivity spectrum.  While I spent most of my life in a state of frustrated, anxious action-paralysis, I've morphed into somewhat of a workaholic.

Now, don't get me wrong - I'm not unhappy about that.  When I was a little girl, I dreamed of becoming a workaholic when I grew up.  I didn't carry little-girl purses around as a kid.  I carried a little toy doctor bag that I repurposed as "my briefcase." I filled it with crayons and papers and glue, so that I could do "my paperwork."  I'm not kidding.  While many kids played dolls, I played "paperwork."

It's interesting, now that I think back on that time so long ago, that there must have been something in me that recognized a disconnect between who I felt I was, and how I would manifest it.  After all, real-life princesses probably don't pretend to be princesses.  Ordinary non-royal little girls play "princess."  I guess for me, being focused and driven and productive felt like the stuff of fantasy.

And for too long, it was.  But then I got help, which. . .um . . .helped.  The problem that I've discovered, is that I haven't really yet learned the behavioral side of ADHD management.  I'm still very much beholden to my chemistry.  These days motivating is a much, much easier thing to do than slowing down, taking stock, and choosing one path at a time instead of "all" the paths at once.  In the process, I've neglected some things just because there were just so many things.

Being IPG  - or IPG-in-Overdrive - is a process.  It's a journey of learning, and luckily, I love journeys of learning.  So, in honor of not having fallen off the face of the earth, and of learning, and of possibly getting to work on time today (because it's nearly 5:00am and I'm still up so I can't oversleep), I'll share with you a post from IPGs Face Book page.

It was supposed to be just a quick status update around the New Year, with a nod to the Arch Frenemy of the ADHD-afflicted: the New Year's Resolution.  But alas, it didn't really stop before it became a full-blown post on one of life's lessons that I still have yet to learn:  how to pack a purse like a normal human being.  From December. . .: 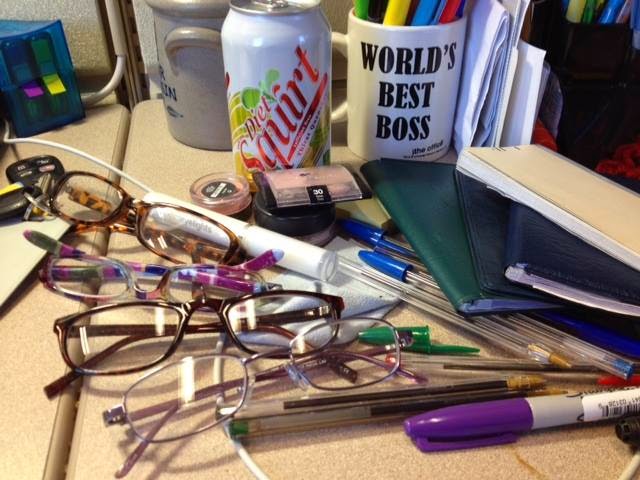 Okay, so I made it to work, earlier than yesterday, but with more "ish" than I would have liked. When I got to work, I needed my reading glasses and a pen.  For these items, I went into my purse, otherwise known as "A Giant Sack of Shit." This photo shows what I pulled out of my purse. Unfortunately, the cute bunny rabbit wouldn't sit still and ran away before I could snap the pic. For the love of all that is good and holy, WTF, IPG!?!? I have *one* set of *two* eyes. That's it! There is next to no likelihood that I will sprout 3 more pairs of eyes today to necessitate all those reading glasses. This isn't ADHD. This is a real sickness I'm dealing with!
But on the bright side, I have the checkbooks. Checkbooks are useful! Whoo-hoo - let's go shopping! Except here's the thing: only two of those books have checks in them. The other two have only ancient carbons and a couple of raggedy deposit slips. The books with the checks are for the same account that has almost no money in it! Certainly not enough money to enable a frenzied check-writing shopping spree that would require 8 pens, a Sharpie, and a tablet stylus! But thank goodness I have 3 little palettes of pink eye shadow and a mascara, just in case I would need, for any reason, to spontaneously put on a dramatic reenactment of getting dressed for senior prom. Do you think there might be a quarter in this Sack of Shit somewhere in case I get thirsty testing all the pens to find one that writes?? One would think, but No! Of course not! Why would I devote any space to coins when I can reserve all that valuable real estate for 17 more pairs of reading glasses! But no worries, because lo-and-behold, there was a can of Diet Squirt in my SoS. Whew! That hit the spot! With all that, I was now ready to get down to business! I would never let a giant sack of shit get in the way of me being "The World's Best Boss," as evidenced by the mug on my desk - the mug that is full of more magic markers than anyone should require for their grown-up job. But the markers come in very handy for color-coding a filing system for a purse, and drawing a map of eyeglass locations. . .never mind the circular problem created by trying to read a map without one's glasses. And this, Folks, is what's wrong with my life. Oy.
Posted by Unknown at 2:52 AM No comments:


Check out IPG's review of this book here.